You Hide Me: 50 Years On – Webinar Series

*The term Pan African is an identification that encompasses the peoples of the African continent and all of the African diaspora, where people of African descent can be found.

The Africa Institute, in collaboration with the June Givanni Pan African Cinema Archive, present a film program titled Decolonizing African Cinema: A History. Launching October 21, this program seeks to situate influential works of African cinema in relation to contemporary films, and highlight the trends and developments that have defined the critical conversations and debates around this cinema.

Decolonizing African Cinema: A History will examine the influences that have shaped the foundations of African ideas about cinema. By positioning these perspectives in a broader context, the program discusses how various interventions have been informed throughout history. Presenting a curated selection of films and critical perspectives–which echo across contemporary debates on filmmaking throughout Africa and the African diaspora– the program will explore the impact of the past on present-day African cinema, with its various intersections, continuities and discontinuities.

Structured over four webinar symposiums, each session will focus on a theme to be explored by expert discussants. Each symposium will be accompanied by a complimentary set of films for both essential and recommended viewing. The theme of each symposium provides a framework for the discussions and creates a dialogue around the foundations of African cinema, and its significance for contemporary and on-going debates.

The symposiums are open to the public, and will be of particular interest to students of African cinema. Both The Africa Institute and the June Givanni Pan African Cinema Archive acknowledge the lack of knowledge and resources for the study of African cinema in Africa, and hope this program serves as an accessible contribution to the field. There is also a recognized need for a reframing of contemporary debates, inviting and encouraging new perspectives that prioritize issues pertinent to the African cultural economy and its future.

Read more about the event here

The series of webinars in this showcase was organised by the June Givanni Pan African Cinema Archive (JGPACA) with partners SOAS/African Screen Worlds; AFFORD; and The Africa Centre; with assistance and support from The Art Fund and MayDay Rooms. The film You Hide Me was made by Ghanaian filmmaker Nii Kwate Owoo in the British Museum in London in 1970 and presented the case for the restitution of African art, which is still resonant today. This series was arranged to mark the 50th anniversary of this film and bring it to wider attention. The film – which is held in the JGPACA – can also be seen on the Vimeo on Demand platform: vimeo.com/ondemand/youhideme

The first in this series of 4 webinars foregrounds the need to rethink the sources of knowledge and institutional frameworks that underpin the curating and teaching of African art, and the value of Africa’s historical cultural knowledge for a better understanding of the issue of restitution.

You Hide Me: 50 Years On (Pt. 2 of Webinar Series) – Restitution and the Moving Image

The second event in the You Hide Me: 50 Years On webinar series focusses on the demand for restitution in the context of African film and moving image archives more generally.

You Hide Me: 50 Years On (Pt. 3 of Webinar Series) – Restitution & Securing African Heritage

The third event in the You Hide Me: 50 Years On webinar series discusses the topic of restitution in relation to the role of African organisations such as the Africa Centre in having a voice in defending the future of African heritage.

You Hide Me: 50 Years On (Pt. 4 of Webinar Series) – Actions Going Forward

The fourth webinar in the You Hide Me: 50 Years On webinar series draws together the main discussion points, ideas and suggestions for taking forward the issues raised around this broad and resonant topic of the restitution of African Art. It was held on 24 November 2020.

“In 1970, ‘YOU HIDE ME’ a film written, produced and directed by Nii Kwate Owoo, Ghanaian documentary and feature film maker, on the colonization of African art, was seen as controversial. The film is an expose of the theft and concealment of ancient and rare African Art, hidden in plastic bags and wooden boxes in the basement of the British Museum. For many the film heightened the already growing antagonism towards Western art establishments, and the role they played in the looting and hoarding of precious works of art from the ancient cultures of the world.” Nii Kwate Owoo https://vimeo.com/ondemand/youhideme 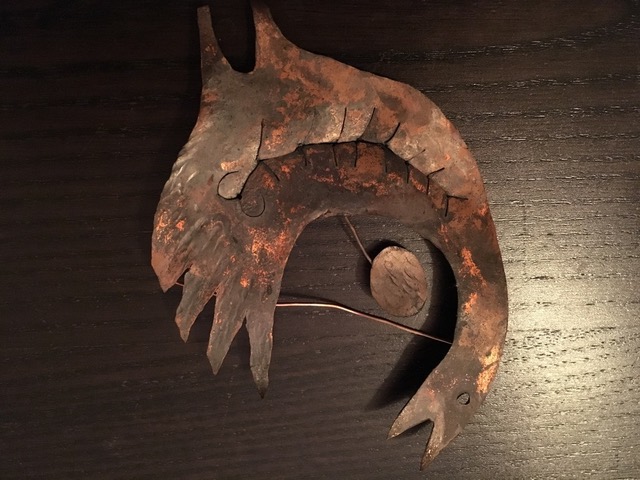 This event will draw together the outcomes from the Webinars organised by the June Givanni Pan African Cinema Archive and partners – SOAS University of London; AFFORD, and the Africa Centre, to celebrate 50 years since the film You Hide Me was made by Nii Kwate Owoo in London in 1970. This event will reflect on and digest the main points and propositions around the restitution of African Art to emerge in the webinars, and to present some of the ideas for action going forward.

The three Moderators of the Webinars in this series:

Other Commentators will include: 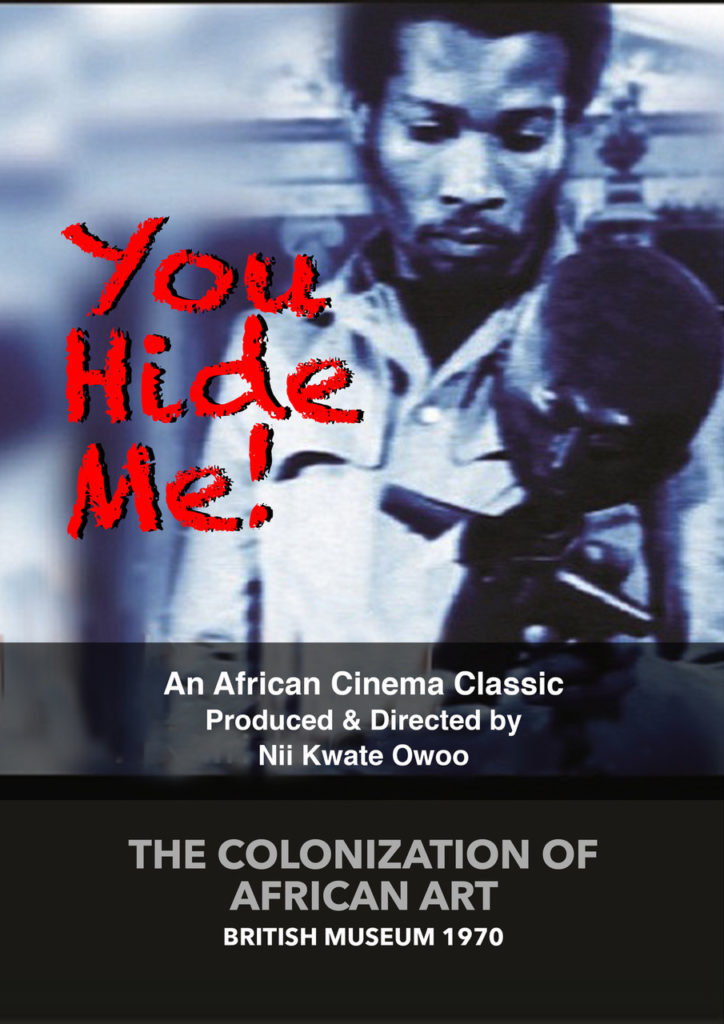 You Hide Me: 50 Years On Webinar Series

In 1970 Ghanaian filmmaker Kwate Nii Owoo managed to enter the British Museum to make this short film about the valuable African artefacts held there.  His film is held in the June Givanni Pan African Cinema Archive (JGPACA), and together with partners the Africa Centre, SOAS University and AFFORD we bring you a series of Webinar’s in celebration of the 50th anniversary of that film and its prevailing argument for the restitution of African Art.  Panels will feature UK and international curators, filmmakers, artists, writers, cultural activists, museum professionals and academics, including the filmmaker himself.

Watch the film on Vimeo

Restitution and the curating and teaching of African Art

Restitution of African Art and the Moving Image

Restitution: Africans involvement in deciding the future of part of their heritage and the role The Africa Centre can play in that process?

(Invitation only) Roundtable drawing together key outcomes from the Webinars & the production of a series of podcasts resulting from the series.

‘The Time Is Now’ was a programme curated by June Givanni Pan African Archive in support of with ‘The Place Is here’ exhibition at the Nottingham Contemporary over the same period.  The structure of the programme was made up of three film screening events between 4th February 2017 to 25th March 2017 reflecting stories of the 1980s with some contemporary reflections through the lens of Black and Asians filmmakers.  All three film screening events included a Q&A with filmmakers and cast guests with a chair who hosted each screening and discussion. 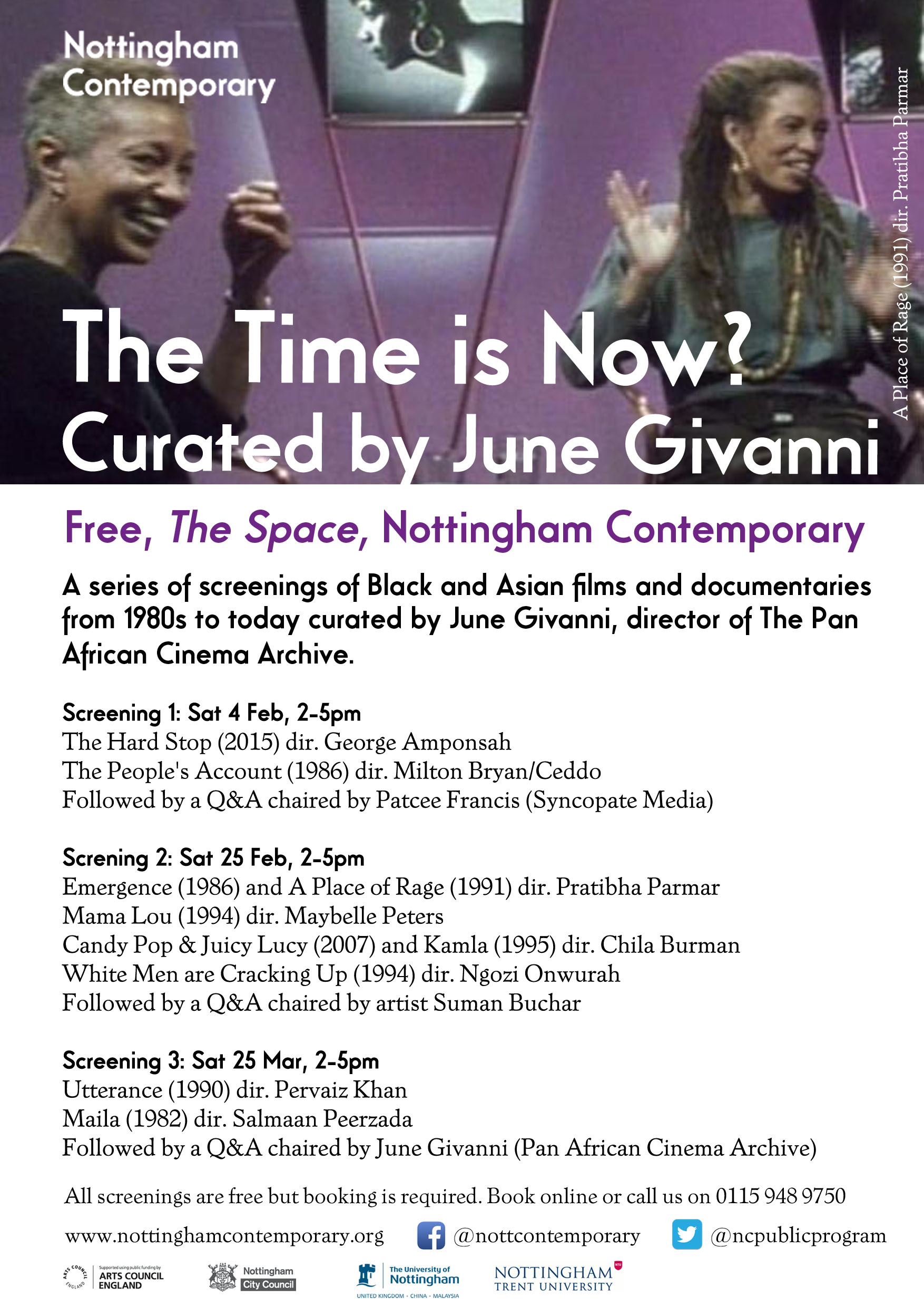 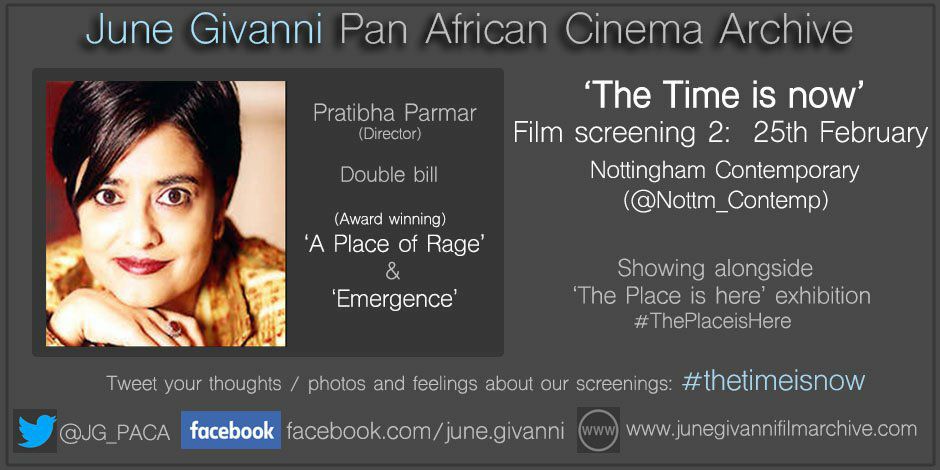 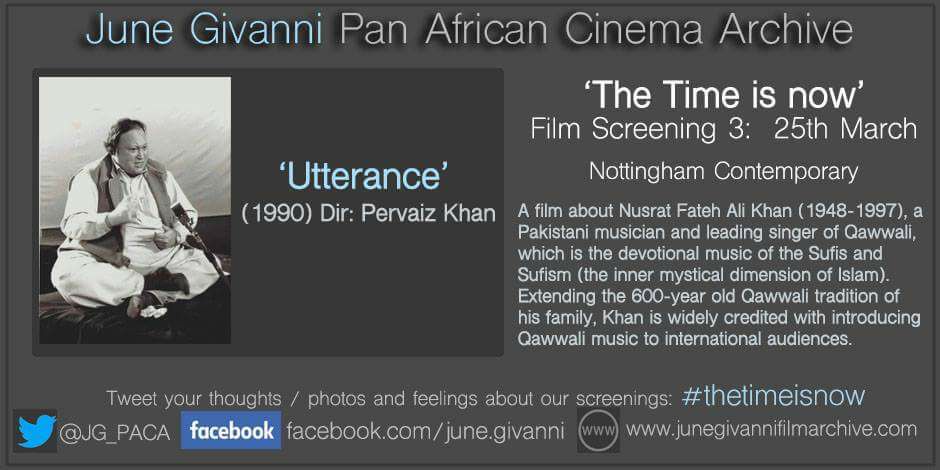 On Friday 4th February 2017, Nottingham Contemporary opened its doors to the public for their first major exhibition of the year called ‘The Place is Here’. The exhibition explores the pivotal decade for culture and politics of the 1980s with responses from the Black Arts Movement in Britain. Each of the 4 rooms exhibited and projected the work made and conversations which took place  during this period from the perspectives of writers, artists, collectives, photographers and more. Artists include: Sonia Boyce, Lubaina Hamid, Keith Piper, Martina Attille/Sankofa collective, Eddie Chambers and more.

June Givanni Pan African Archive was present within the exhibition, having an archive installation in the People’s Account room in one of the main spaces. Showing a collection of work including materials and a small poster display relating to GLC’s Third Eye Festival 1983. Four framed posters of the Anti Racist murals by black artists commissioned by the GLC in 1986 were also on display from JGPACA. Archive works on show included Bohemian Noir by Amani Naphtali,  by Third Eye  (Rough Cut) by Imruh Bakari  and  The People’s Account by Ceddo film workshop, In Conversation ‘C.L.R. James and E.P. Thomson’ by Mike Dibb,  animation films A Lesson In History and Black Skin White Masks both by Maybelle Peters. As well as June Givanni Pan African Archive having to space to recall stories from this era, the Archive hosted a programme of four screening films reflecting memories on the decade which relates to present. The programme is called ‘The Time Is Now’.

‘The Place is Here’ closed its door on Sunday 30th April 2017. The exhibition is due to go on to South London Gallery and middlesborough arts museum.

The film was screened to 50 guests from the public. The screening was a special event where the audience were treated to the unique experience of seeing the film in its original 16mm format for the first time in over 30 years. The audience had the opportunity to discuss the film with H.O. Nazereth and chair Colin Prescod of Institute of Race Relations.

Films of Charles Burnett, Billy Woodberry, Julie Dash, Larry Clark, Haile Gerima, Barbara McCullough,Ben Caldwell, Zeinabu Davis and many more, in the presence of some of the visiting UCLA  filmmakers of the 1970s and 1980s.

The Pan African Film Festival of Ouagadougou (FESPACO)starts this weekend 28 February 2015.  It will be my 30th year of attending  the festival.